The Biomedical Congress is an annual event organized by the student union of the faculty of medicine together with the master students themselves. This event is organized to welcome predominantly master students, but Bachelor and PhD students and other interested guests are more than welcome to attend the congress. The congress has become a really important part in the education of the students. The Faculty of Medicine gives us full support every year to organize this important event. As the past two years the congress was not able to take place we are very much looking forward to organizing this 10th edition of the congress.

The ambition of the Biomedical Congress is to interest students and broaden their view beyond textbooks and exams. We provide a look at life after graduation, this with a broad perspective focussing on both academic research as well as the biomedical industry. We hope to see many students with different backgrounds and interests and companies that complement them.

For the companies, The Biomedical congress will be a great place to meet their future employees and present themselves as an established value in the biomedical field.

The congress consists of two important parts. First of all we have lots of very interesting and educating speakers. These people are professors but can also be people from companies or institutes, so it does not feel like the students are listening to lectures the whole afternoon. We want a mixture of speakers so the students are as informed as possible.

The academic part of the congress consists of 2 head speakers: one to start the congress with and the second one to end the congress. Between the head speakers there will be a panel and a sort of interview. This all to make the congress as engaging as possible, so the students can also interact with the speakers and feel involved.

Secondly we organise a job fair. The job fair will consist of different stands with lots of diverse companies for the different minors of the biomedical students. Big and smaller companies, so the students can have a feeling of both worlds big and small within the biomedical work field after they graduate.

The ultimate goal of the biomedical congress is to educate the students and broaden their view and knowledge beyond the textbooks and exams. This year we will organize a special edition dedicated to the COVID-19 virus and what life in the biomedical industry will look like after the pandemic. So the students can prepare themselves as well as possible for their life after graduation. With the congress they have a preview of both the academic research as well as the biomedical industry. By having the coronavirus as a subject and the influence on our biomedical future we hope to not only attract all the students (Bachelor, master’s and PhD’s), but also professors and companies that would be interested. Predominantly for the companies this will be a great opportunity to meet their future employees.

Hugues Duffau is Chairman of the department of Neurosurgery in the Hôpital Gui de Chauliac at the University of Montpellier. He is head of the research team “Plasticity of the central nervous system, human stem cells and glial tumors” at the institute of Neurosciences, Montpellier (INSERM).

Professor Duffau studied medicine at the University of Toulouse and trained to become a neurosurgeon at Hôpital Pitié-Salpêtrière in Paris.

With his research, professor Duffau formed the basis for a new model of the organisation of the brain wherein dynamic networks interact and reorganise themselves. In this model, the function is a consequence of parallel activity of the brain in different groups of interconnected neurons. This led to new insights in the neuronal basis of language and cognition. It also led to new applications for therapy of brain tumors and epilepsy.

The research of professor Duffau can be categorised as “reversed translational”. Treating and operating on patients and critically interpreting his findings, led him to re-evaluate the knowledge of neuroanatomy. This led to a new view on the functioning of the human brain regarding language, memory, executive functions and more.

Professor Swinnen is head of the laboratory of Lipid metabolism and cancer at the KU Leuven. He is also chair of the department of Oncology.

The professor and his team focus on the altered lipid metabolism in cancer cells.

The group has made fascinating observation that development and progression of cancer is accompanied by dramatic changes in the cell’s composition of phospholipids.

These findings led to a new concept in which cancer cells alter their functioning by changing their membrane lipid composition. The group now pursues to further establish this concept and translate these insights into innovative diagnostic tests and treatments.

Stein Aerts is a bio-computer scientist at the KU Leuven and the VIB. He runs his own laboratory for Computational Biology. Professor Aerts is known for his ground-breaking research to investigate the mechanisms of the human genome. He has published many papers in journals such as Nature Genetics, Nature Methods en Cell.

They focus on the retina and the brain in Drosophila melanogaster as a main model to investigate a variety of biological problems.

Dr. Alan URBAN has been funded by the French Ministry of Research and Technology and received his PhD in Molecular and Cellular Biology from Lorraine University in 2008, France. He graduated in experimental surgery from Paris Descartes university. He was Assistant Professor in neuroscience at Ecole Supérieure de Physique et de Chimie Industrielle (ESPCI) and then became group leader at INSERM Hospital Sainte-Anne in Paris. He has an international working experience as invited scientist at the RIKEN Institute (Japan) and in Tel-Aviv University (Israel). He has received several scientific and entrepreneurship awards such as the CIPP (2013), the Nobert Segard (2014) and Concours Lépine International (2018). He created several companies and is an independent consultant in imaging technology. His team significantly contribute to the development of functional ultrasound imaging (fUSi). Since 2016, he is a group leader at the Neuro-Electronics Research Flanders (NERF) and part time professor in the neurophysiology department at the KU Leuven.

Functional ultrasound imaging (fUSi) is an innovative modality based on plane-wave Doppler ultrasound for detection of small hemodynamic changes in brain vessels triggered by neuronal activity. The benefits of fUSi include a good spatial (<100um pixel size) and temporal resolution (<100ms), a high sensitivity, a large field of view (several cm 2 ), an extended compatibility with electrophysiological recordings (tetrodes, silicon probes,…) and with the optogenetic interrogation of neural circuits. Our group has demonstrated that fUSi can reliably map sensory-evoked responses across several synapses without the need for temporal  averaging and is suitable to decipher the complex links between brain activity and behaviour in animal models. fUSi can also be used to study cerebral blood flow regulation and neurovasular dysfunction in pathologies such as stroke, Alzheimer disease, traumatic brain injury or glioblastoma. Additionally, fUSi is providing reliable data for middle throughput screening during pharmacological studies (ie target validation, measure of off-target effects…). On the bedside, fUSi may be used for non- invasive functional brain imaging for assessing the severity of birth asphyxia or intraoperatively in adults for precise identification of eloquent brain regions during resection of pathological tissue such as pharmaco-resistant epilepsy or tumor(s). A new generation of fully digital fUSi scanner with 3D real-time imaging capabilities is currently in development in our team at the NERF.

Bennie Ten Haken currently works at the Institute for Biomedical Technology and Technical Medicine (MIRA) , University of Twente. After his research on superconducting materials he made a switch to the field of physics for medicine and started a new research group on Magnetic Detection & Imaging (MD&I).

Dr. at the KULeuven at the Campus Groep T, Technology cluster Materials technology. 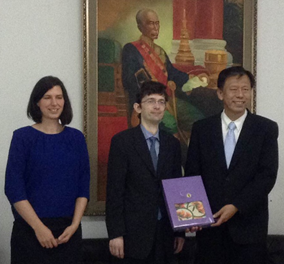 After graduating in 2005 as an industrial engineer in Biochemistry at the KU Leuven, Dr. Veerle Bloemen went to the VU University Amsterdam. There, she earned her doctorate in Sciences at the Department of Cell Biology. Following her PhD, she returned to Leuven as a teacher of Biochemical and Biomedical Research Methods and Medical Bioengineering. Her research at the university hospital Gasthuisberg aims to grow bone tissue from stem cells. These ‘new human materials’ allow fractures and other bone defects to heal naturally.

In February of 2015, she was part of a delegation of researcher of the KU Leuven that went on a mission to Laos, Thailand an Cambodja to strengthen the relations with the partner universities and strengthen the collaboration.

Third speaker: to be announced

The biomedical congress is made possible with the support of several sponsors. 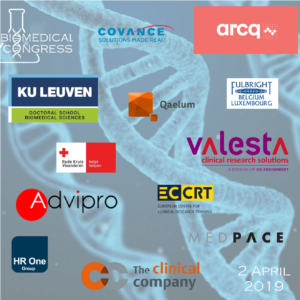